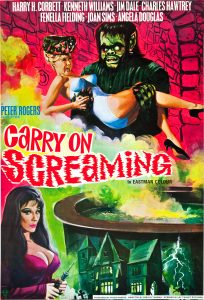 This delightful spoof on the contemporaneous – and equally popular – Hammer Horror style is undeniably a highlight of the “Carry On” series: the film is remarkably evocative with respect to color scheme, sets, lighting, even the score (though the rock’n’roll title track is somewhat unwarranted)…but, then, it’s regrettably neglected whenever genre parodies are discussed (in my opinion, it’s a must for any Hammer devotee)!

The presence of series stalwarts Sidney James and Kenneth Connor is missed here; however, atypical ‘recruits’ Harry H. Corbett (in his one and only “Carry On”) and Fenella Fielding (as a Morticia Addams-type nymphomaniac – she had appeared in CARRY ON REGARDLESS [1961] as well as Hammer’s own spoof, THE OLD DARK HOUSE [1963]) more than make up for this. Among the typical horror elements we find here are Kenneth Williams as Mad Scientist, Zombie and Invisible Man all rolled into one, two Frankenstein Monsters named Oddbod and Oddbod Jr. (a nod, no doubt, to Oddjob from the James Bond adventure GOLDFINGER [1964] – it’s interesting that the second creature is generated when electricity is applied merely to the missing finger of the first), two separate Hydes, a Mummy, plenty of wax figures, a sinister-looking butler, etc. Incidentally, the police investigation is redolent of a Holmes/Watson mystery (after all, Hammer themselves had filmed a version of THE HOUND OF THE BASKERVILLES [1959]) – with Corbett and Peter Butterworth making for a great bumbling pair of sleuths.

Series regular Charles Hawtrey only has a bit part here as a tell-tale lavatory attendant/gardener, but his messy death is hilarious; ditto future Dr. Who Jon Pertwee as an eccentric police-lab technician – ironically, there’s a “Who’s On First?”-type routine concerning Williams’ character (called Dr. Watt)! Jim Dale and Angela Douglas are again the young lovers, while Joan Sims’ role is practically a repeat of her nagging wife from CARRY ON CLEO (1964). By the way, the flustered mannequin shop owner is played by Frank Thornton, later of the ARE YOU BEING SERVED? (1972) TV series. As expected, Talbot Rothwell’s script contains a lot of unsubtle puns – but the film itself is capped by quite a terrific (if hysterical) climax to rival Hammer’s best efforts.