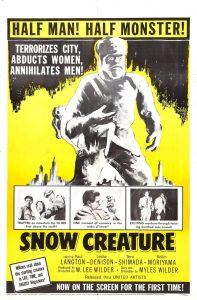 Silly, preposterous cheapie from Billy Wilder’s incowpetant kid brother, W. Lee Wilder(“Killers from Space”, “Phantom from Space”, “Manfish”). A churlish failed botanist & a drunk photographer lead a group of Japanese actors trying to pass as Tibetans into some poorly designed fake Himalayan sets; a tall shaggy fellow steals one of the “Sherpas” wives, and a merry chase ensues with the “legendary Yeti” to retrieve the wife & bring the Big Hairy Guy back to the States. Once in Los Angeles a debate brews over wether the walking rug is a human monster or mutant DuPont Stainmaster, and therefore cargo. The carpet then escapes, haunts the sewers of L.A., and is given the Final Treatment by the cops. Slow, stodgy, and dumb as a box of Himalayan rocks, this early ABSM(Abominable Snowman)stinker features the single worst snowman costume ever – it’s obviously a huge shaggy rug, with a square hole cut out of the face so the “actor” stuffed inside can see/breathe. The poor unfortunate inside can barely moove around, and we even get to see him/her slip on the icy rocks that are supposed to pass for the Himalayans. Wilder’s threadbare technique of using the same shots and scenes over and over again to shave moolah off the the film’s production costs serve as further hilarity – one shot, of the “snowman” stepping out of the shadows, is shown and reversed over and over and over, some 20 or 30 times. Like a brief glimpse into future Coleman Francis moovies, actors spend much of the non-Himalayan time smoking and/or drinking coffee. You will remember Paul Langton, who plays Botanist Frank Parrish, from such stinkers as “IT:The Terror from Beyond Space”, “The Cosmic Man”, and “Invisible Invaders”, although he may best be remembered for 1957’s “The Incredible Shrinking Man”, which was actually a pretty good flick. Lock Martin(“Invaders from Mars”, “The Day the Earth Stood Still”, “The Incredible Shrinking Man”) reportedly was the poor soul stuffed inside the shaggy rug, a very tall actor known as 50’s tv host “The Gentle Giant” and for playing Gort, the robot in “The Day the Earth Stood Still” – kind of a Richard Kiel of the 50’s. As for “Snow Creature”, well its typical W. Lee Wilder, and that means slow, cheap, and dumb. The MooCow suggests viewing the W. Lee Wilder trilogy

0 211
Hey Guess What The Lost Empire Is Back