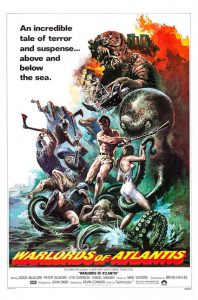 Warlords of Atlantis starts deep in outer-space as the credits play over a large ball of flaming Martian rock as it hurtles towards a prehistoric Earth & ends up in the Sea… The film then switches to the middle of the Atlantic Ocean during the Victorian period. A boat named the ‘Texas Rose’ slowly sails along, on-board is a rich Professor (Donald Bisset) & his son Charles Aitken (Peter Gilmore) who hope to find the legendary lost underwater city of Atlantis using American Greg Collinson’s (Doug McClure) specially designed diving-bell. Captain Daniels (Shane Rimmer) warns the Professor about these waters, waters where boats have been known to just vanish but no one is interested & they carry on regardless. Both Charles & Greg dive deep under the Ocean’s surface & encounter an aquatic dinosaur that tries to eat them, they also discover a solid gold ancient relic which the crew above manage to get aboard. Unfortunately for them a giant Octopus attacks the Texas Rose & the crew, Grogan (Hal Galili), Fenn (John Ratzenberger), Jacko (Derry Power) & the Captain are taken while the young deckhand Sandy (Ashley Knight) is left behind with the now wounded Professor. I’m not quite sure how but everyone ends up in a huge underwater bubble which houses the world of Atlantis & it’s various cities. They are welcomed by a guy in a silver sequin dress named Atmir (Micheal Gothard) who takes them to the 3rd city of Troy, Charles is deemed clever so is separated from the group & taken to meet the supreme council who appear to be lead by Atraxon (Daniel Massey) & Astril (Cyd Charisse) while the others are condemned to a life of slavery & thrown into the dungeon’s. Being a slave for the rest of his life is an idea which Greg isn’t too keen on so with the help of a rather good looking female slave named Delphine (Lea Brodie) who luckily for any male viewers wears a skimpy cleavage revealing dress & some of the local wildlife they decide to make a break for it, but will they be able to rescue Charles & make it back to the diving-bell before they are either eaten by some monster or killed by the Atlanteans?

Directed by Kevin Connor this was the fourth & final ‘lost world’ film he & star Doug McClure made together, the first being The Land that Time Forgot (1974), the second was At the Earth’s Core (1976), after that came The People that Time Forgot (1977) & Warlords of Atlantis rounded of the loose series of films which is probably my favourite overall. The highly entertaining script by Brian Hayles moves along like a rocket & is never neither dull or boring which always helps & it also manages to combine the swashbuckling adventure, fantasy & Sci-Fi elements that make these types of films so much fun to good effect throughout. It never takes itself too seriously with references to the Mary Celeste coming to mind & the bizarre notion that the Atlanteans are in fact Martians. There are a few plots holes & slightly underdeveloped ideas but hey, nothings perfect right? The characters are likable & the treacherous crew sub plot worked well, I was a little surprised about the end as Doug strangely didn’t get the girl this time. Like the previous Connor films the monsters aren’t exactly the pinnacle of realism, in fact most people would probably describe them as poor but I’d rather have the charm & personality of a man in a rubber monster suit than a cold lifeless fake looking computer graphic any day of the week. Along with the giant Octopus, flying prehistoric Piranha fish, dinosaurs & large Eels I especially liked the giant Millipede/fish creature that rises out of the water a couple of times, great stuff. I was impressed with the production design credited to Elliot Scott & the sets in particular, some of the Atlantis cityscapes were obviously just flat matte paintings but they looked good overall, from the dungeons to the higher cities which have a palatial feel to them & as a whole Warlords of Atlantis is quite a handsome film to watch. Forgetting about some of the less than spectacular special effects on a technical level Warlords of Atlantis is solid throughout, the acting is OK & I personally think the hot Lea Brodie as the love interest Delphine is easily the most attractive out of the four films & makes for the best heroine, the photography is nice enough & it has an all round decent polish about it. I really liked Warlords of Atlantis, much like Connor’s other monster films this is terrific fun if your in the right mood & can forgive the generally dodgy special effects & as we all know good special effects don’t necessarily guarantee a good film so surely the opposite is true as well, right? Well it is in this case, great entertainment for all the family & well worth watching.