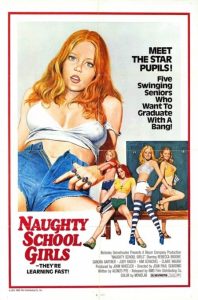 This is a very weird sexploitation film that kind of reminded me of another sexploitation film of that era “Cherry Hills High” in that it seems much more interested in its bizarre and random plot than it is in pure softcore titillation.

A group of private-school seniors want to raise money to buy a new bell for their school (why exactly, I’m not sure), so they hit on the idea of prostituting themselves (naturally). The problem is they’re all virgins (which is unlikely for older high school girls in the 70’s and downright laughable given how mature all these actresses look here). This virgin-prostitute theme is similar to the early Nastassia Kinski vehicle “Boarding School”, but that was a dubbed German production while this appears to be American (although it’s hard to tell as the director is named Jean-Paul and the lead actress, Rebecca Brooke, was active in both European and American exploitation). Anyway, as in “Booarding school” the five heroines have a ridiculously hard time prostituting themselves. But the movie strangely goes for comedy and character development instead of exploiting this preposterous plot to its full sex-soaked potential.

I have never seen most of these actresses before or after this, but they’re all reasonably pretty, even if only three of the five have nude scenes and only Rebecca Brook has a particularly graphic softcore sex scene. Pretty blonde Brook (also sometimes credited as Mary Medum) was a one-time girlfriend of Radley Metzger and debuted in his partially hardcore S-and-M themed “The Image” (aka “The Punishment of Anne”). She also made movies with Joe Sarno and French director Max Pecas and had a small role in the aforementioned “Cherry Hills High”. The same year she played a teenager in this she also played the adopted MOTHER of a teenager in Max Pecas’ “Felicia”, so she was obviously pretty versatile. This does not compare with her sexier movies by a long shot. It’s not particularly funny (although it’s not painfully unfunny either). And while it might work as a sweet, nostalgic look at 70’s adolescence, it’s also too ridiculous to take very seriously. It’s not a TOTAL waste of time though I guess. . .