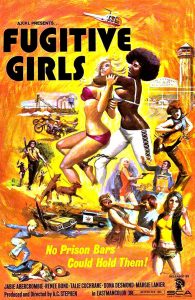 No one will mistake “Fugitive Girls” (the most common title for this film) for great cinema. The ultra-low budget, editing errors and continuity blunders alone guarantee that. But taken for what it is – a 1974 exploitation quickie, a drive-in nudie flick about female criminals – this movie really works. With the legendary Edward D. Wood Jr. contributing one of his finest screenplays and also acting in two different roles, the film won’t disappear. “Fugitive Girls” is good entertainment!

The acting ranges from passable to good, the dialogue ranges from classic Woodian nonsense to decent, the music often works very well, and technically…well, this aspect doesn’t usually manage to impress. Director Stephen Apostolof deserves credit, certainly, for the superb pacing and for bringing out the best in actresses Tallie Cochrane, the ’70’s adult superstar Rene Bond (now supposedly deceased) and the strangely overlooked but genuinely charismatic Margie Lanier.

Rarely do these no-budget grindhouse flicks deliver like this one does, and not because of overt sex or violence; “Fugitive Girls” succeeds on it’s own quirky charm and likability. Don’t get me wrong, I’m not saying this is a *good* movie, but a great one for it’s genre. Despite all of this, “Fugitive Girls” rarely receives extended mention in Ed Wood discussions, probably because it’s such an oddity. It isn’t family friendly like, say, “Plan 9 From Outer Space”, doesn’t feature any of his most famous players from his earlier period (like Criswell in “Orgy Of The Dead”), and this film barely qualifies as softcore, much less hardcore (such as “Necromania”). You get the idea.

0 204
Celebrating Phoenixville, Home of The Blob

0 167
The Son Of Morricone: Danielle Luppi