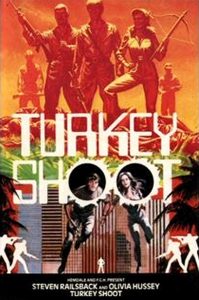 Ozploitation. Exploitations colloquial cousin. During a period Ozploitation films where popular and Turkey Shoot is a notable success amongst some of the trash of the Australians attempts at exploitation films. It’s fairly controversial ‘The Most Dangerous Game’ approach has helped it gain a fair amount of cult following over the years and all though it doesn’t hold up in the slightest to later films with the same honourable human hunting intentions such as Battle Royale and more recently Exam it still holds up nicely as the definitive Australian approach to the subject matter.

Turkey Shoot takes place in a dystopian future, now past, where ‘social deviants’ can be re-educated and returned to society through concentration style camps. The films narrative starts by following the lives of three newly arrived inmates and their view upon the extreme violence and toil prisoners suffer throughout their stay, mostly beatings and depravity by a hugely entertaining large bold Australian with a handlebar moustache. In the second half of the film the camps owners, safari British style hunters, round up five one-dimensional, to the extreme, characters (we have whore, rebel, rebel mark 2, bad guy and vulnerable) and force them to participate for their possible freedom in a human hunt, staring themselves, called Turkey Shoot. When faced with the dilemma of what to do when hunted each character uses their own personality to forge different ways of dealing with the situation and in true exploitation style extreme violence bordering on hilarity ensues.

Brain Trenchard-Smiths direction is riddled with plot holes but the right ingredients are there; i.e. gore, nudity and some kind of circus freak werewolf guy. What makes the film and its direction good is that it doesn’t treat itself seriously, there is no character development or even some kind of message or lesson learnt by the end of the film. It just wants to exist to entertain its audience and being a film exploiting violence make money. All the factors that would bother audiences in drama films don’t matter in Turkey Shoot and can be disregarded as its honesty in being a technically bad film tells the audience that it wasn’t made to win awards or be visually or musically stunning.

Naturally the acting is bad. But as all the characters only have one characteristic for the actors to act in the characters are appealing as comical relief from the films serious, even if not shown in the film, underlying story. The English actors are great in playing their roles as the bad guys in typical posh ascents to stress that they are ‘better people’ than the Ausies. The person that stands out most however is Roger Ward as Chief Guard Ritter, his enthusiastic approach to the violent sadistic character fits perfectly creating a highly memorable giant Australian with a handlebar moustache. This along with the werewolf placed in the film just to chew peoples toes and such are probably the most imaginative parts of the film and make it memorable over many other films in its genre.

Visually and musically there is little going on. The film is shot and edited nicely enough but sometimes its conventional style makes you think that the director could have done so much more. The aspect that saves its dull camera work comes from the variety of lush Australian landscapes ranging from the sandy concentration camp style centre to woods, fields of long dry grass and beaches. This helps the film as a whole always capture your interest and I’m in no doubt that without this kind of variety in the sets landscapes the film might seem very boring indeed. Overall Turkey Shoot holds up as an entertaining popcorn flick and with its blend of extreme violence and lovable characters (for the most part, villain-wise anyway) makes a entirely watchable exploitation movie. If you are a fan of the The Most Dangerous Game style situations it might boost itself to a must watch.