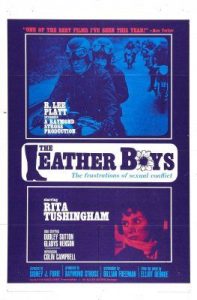 An engaging hybrid of British ‘kitchen sink’ drama and American biker film, this atmospheric feature was considered daring in 1964 as it touched upon homosexuality, however obliquely. It has a suitably somber appearance in B&W but, filmed in CinemaScope, there is a certain elegance to its images.

Dot (Rita Tushingham) and Reg (handsome newcomer Colin Campbell), a young working-class couple, get married. She is sixteen, shallow, selfish, and vain. He is sweet, generally light-hearted, and thoughtful, but under pressure reverts to macho, blue-collar stereotype. As a result, they fight constantly and soon separate. Reg meets Pete, a flamboyant and extroverted biker, who becomes his best mate. They move in together while Reg sorts out his life. Despite Pete’s constant mothering, possessiveness, and jealousy, naive Reg only figures out that his friend is in love with him when Pete is outed in a dockside bar at the end of the film. Typically, there could be no happy endings for gay men in 1964.

The film is especially interesting due to the photography, period locations, and the early cinematic homosexual reference. Colin Campbell is beautiful, a wonderful actor, and quite suited to the role of a confused youth trying hard, but not prepared, to be an adult. His pretty, boyish presence is essential to the theme of sexual repression which precipitates all the minor tragedies and frustrations in his life.

Be careful of the edition you buy. The currently available Televista is a poor Pan&Scan version which severely reduces the impact of this cult classic. There are two widescreen issues, from Kino (out of print) on VHS and DVD, and Blackhorse (Region 2). They are well worth searching for, as it makes a great difference to see this handsome film in its original form without half the screen missing. The wide format is especially convincing in the road and racing sequences.