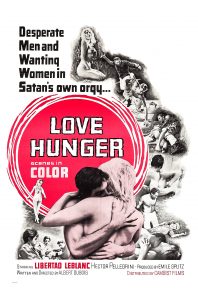 This is a review of the US release LOVE HUNGER, which takes an excellent 1962 Argentinian crime film, set in a desolate rural area, dubs it into English and adds a 12 minute color US-shot nudie sequence as a “flashback” story told by one of the characters. The original film, with three escaped convicts hiding out in the shack of an eccentric old man in a desolate rural area, and then seeing the beautiful buxom Libertad Leblanc who is at first thought to be a vision, is a raw and gritty crime film that holds up well today and is surely even better in its original Spanish-language version. The US color insert sequence does feature a lovely blonde running around nude, so I can’t complain about it, although it does break the continuity of a tense and dramatic film. However, it is cleverly set up in the newly-dubbed dialog of the original film, so it’s not as disruptive as it could have been. Altogether, this is a worthwhile film for those who like sexy Latin American crime films of the early 60s, and for fans of the lovely Ms. Leblanc. An interesting footnote: the trailer to this is added at the end of the video, and it features ONLY footage from the color insert, giving you NO IDEA what 95% of the film is like. Ironically, the b&w feature is a hundred times better than the insert, so while the ad is cheesy and deceptive, it might have brought horny guys into the theatre, where they would see a much better film than had been advertised (and there IS nudity in the original, so really the inserts are unnecessary, except that they allowed the distributors to put “scenes in color” on the movie poster and to have a color trailer).