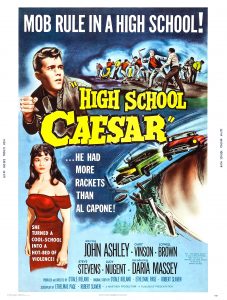 John Ashley gives a memorable performance in this teen exploitation drama of a spoiled but neglected rich kid who pretty much controls the lives of his classmates, arranging for himself to be elected student body president so he can extort from them in other ways. He also arranges for the hero-worshiping class geek to be elected treasurer so he can have access to the till. Ashley isn’t as well liked as he thinks he is, and an act of violence will not only end one life but destroy his reign of terror.

Decent for this kind of drive-in fare, this is pretty mesmerizing in spite of obvious flaws. Some of the teens are obviously much older, and the dialog is often trite and silly. Yet, the psychology which goes into the creation of Ashley’s character was well thought out, especially in his mistreatment of a butler, yet his affection for the cook. When he goes to bed and pretty much cries himself to sleep, it is a cry for help that a lot of teens can identify with. The conclusion is not concrete, which means that the audience must come to their own conclusions.

0 237
The Life and Times of Anna Nicole Smith