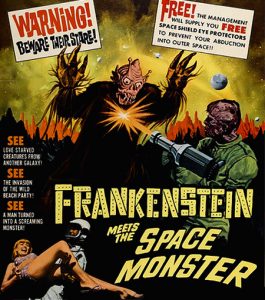 In outer space, a Martian spacecraft commanded by Princess Marcuzan (Marilyn Hanold) and her assistant Dr. Nadir (Lou Cutell) is traveling to Earth to abduct women to breed a new race, since an atomic war has annihilated Martian women.

Meanwhile in NASA, Dr. Adam Steele (Jim Karen), his assistant Karen Grant (Nancy Marshall) and General Bowers (David Kerman) are in a press conference presenting the astronaut Colonel Frank Saunders (Robert Reilly), who will participate of an extended space travel on the next morning. However they do not disclose to the press that Colonel Saunders is an android developed by the scientists.

The Martian spacecraft lands on San Juan, in Porto Rico and when they see Saunders’s capsule on the air, they believe it is an attack and they shoot the Earth ship down. The android is damaged and wanders on the island scaring people and behaving like Frankenstein. Dr. Steele and Karen head to Porto Rico to rescue the android, while the Martians abduct young women to take them to Mars.

“Frankenstein Meets the Spacemonster” is a lame film for the younger generations used to colored movies and special effects. But for me, it is delightful to see since it is a journey to my childhood when I used to see sci-fi films like this one and worshiped National Kid.