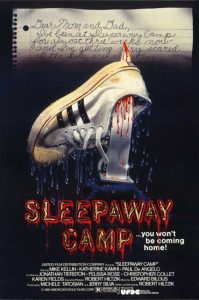 This 1983 horror slasher gem was written and directed by first time director Robert Hiltzik. The story begins with a boating accident which kills the main character Angela’s father and brother. We then move forward in time, now Angela is living with her Aunt Martha and her cousin Ricky. Angela and Ricky then go to camp and it is Angela’s first time going but Rickey has been there before. Angela doesn’t get along with the other campers and is very quiet. A series of murders begin and it is a mystery who is killing all these people. Could it be Ricky who made death threats, could it be Mozart killing these campers because he was picked on, could it be Angela, or could it be someone else? This movie has very interesting and unique deaths without gore. This movie is not for everyone, if you are a fan of cheesy horror movies or just slashers definitely check out this movie. You will never forget the ending.