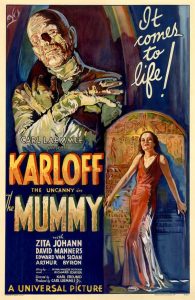 With one of Boris Karloff’s numerous acting successes and a production done the way that a horror feature should be made, this is a well-crafted classic of the genre. From the first scene, the right atmosphere is established, and the story is told at an implacable pace that slowly builds up the tension and possibilities.

As he does with his characters in so many of his horror features, Karloff makes “The Mummy” a menacing monster, yet one with enough human motivations to keep him from becoming cartoonish. Karloff’s approach, as does the movie as a whole, stimulates the imagination rather than the senses, giving this classic version a depth and permanence that cannot be matched by those more recent adaptations that rely on boring “special” effects and contrived “action” sequences instead of a well-told story with solid characters.

Edward Van Sloan, David Manners, and the rest of the supporting cast also help out. The atmosphere and settings are kept relatively simple, but effective. Naturally, the story is far-fetched, but it has a consistency that makes it relatively easy to suspend disbelief. The picture fits together well, and it remains a solid entry in the list of classic horror films.