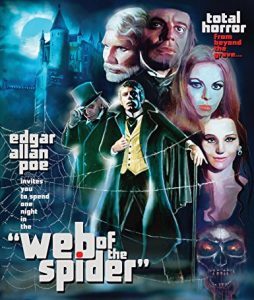 The opening of this film treats us to Klaus Kinski in twice his usual state of delirium – thrashing about in a shadowy, cobweb-laden crypt. He’s playing Edgar Allan Poe, and he looks the very embodiment of an absinthe-soaked poete maudit. His role, alas, turns out to be little more than a glorified cameo! Still, he sets the tone admirably for the next 90 minutes of flickering candelabra, ethereal vampire beauties and white muslin curtains billowing softly by moonlight.

It would be easy to dismiss this movie as a compendium of Gothic horror cliches. Easy but unfair, I feel. Like any other highly stylised art form (Romantic ballet, bel canto opera…) a Gothic tale rests on a set of unreal and perhaps arbitrary conventions. Much of a fan’s pleasure depends on how faithfully, how stylishly, these conventions are played out. In truest Gothic horror tradition, Nella Stretta Morsa del Ragno does very little that’s new – but does it in grand style!