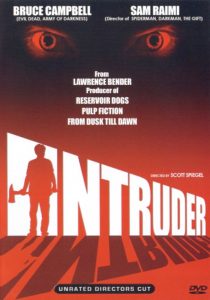 INTRUDER is without a doubt one of the last great slashers from the genre’s peak decade. Scott Spiegel had been a friend of both Sam Raimi and Bruce Campbell since hi school and had also worked with them on most of their early movies, actually co-writing the script for EVIL DEAD 2. For his Directorial debut he roped in his old friends, Placing Raimi in one of his only starring roles. Unfortunately Campbell only managed a small cameo appearance; maybe it was because he was busy with that other great genre piece from the same year MANIAC COP. The movie suffered harshly under the censors, surprisingly more so in the States than at home here in the UK. Although this BBFC certificated print was still missing well over five minutes of footage. There are uncut copies of the movie floating about, but they are in fact so rare that I haven’t yet managed to track one down.

It tells the story of a group of teenage workers at a convenience store that have been told that they will soon be losing their jobs due to the fact that the business is losing money and has to close it’s doors for good. The night crew are asked to stay late and begin pricing down the stock so that it can be sold at a discount. Cashier Jennifer (Elizabeth Cox) is already on edge because her ex-boyfriend Craig (Danny Byrnes) has just been released from prison for manslaughter and keeps hassling her. He has already kicked off with one of the store managers Bill (Sam Raimi) and has threatened to return. As the workers settle in to their late night shifts it seems that a certain unseen someone is butchering the employees one by one in gruesome and merciless ways. Whoever is behind the remorseless murders is saving poor unfortunate Jennifer for last orders. Will she realise that there’s a maniac at work before she becomes chopped meat like the rest of her workmates?

Castwise INTRUDER doesn’t work as well as it should have. Cox doesn’t manage to convince as the heroine and I believe things would have been better if leading lady duties were handed over to Charlie and Emilio’s younger sister Renee Estevez who gave a brief performance as a cashier. But Sam Raimi doesn’t disappoint in his rare starring role and we have the great but somewhat short cameos from Campbell and Alvy Moore. Lawrence Bender produced and co-wrote the screenplay before going on to find success a few years later with RESERVOIR DOGS. Actually Spiegel is the one who introduced Quentin Tarantino to Bender, who went ahead and got the movie made. Quentin returned the favour by crediting the writer/director with starting his career.

Where this movie really manages to shine is in the excellent direction. Taking a leaf from his old friend’s book, Scott keeps things lively with some zany and interesting camera positions and shots. Although his brave and innovative effort may not appeal to every viewer, you can’t help but merit his ingenuity. The dark scenes are satisfactorily lighted and he manages to keep a strong enough pace running throughout. The final chases towards the end get pretty tense and the final plot twist satisfies although it had already been done to similar effect in weaker efforts EDGE OF THE AXE and THE DORM THAT DRIPPED BLOOD. The characters are likeable enough if not greatly acted and the plot doesn’t waste time to introduce brutality as the major attribute. Although this version may indeed be heavily edited it’s still pretty gory and luckily for us the censors weren’t as scissor happy’ as they have been in the past with other attempts. Although you’ll probably guess the silhouetted killer’s identity early on (some releases even have his picture on the cover), it really doesn’t spoil things too much and there’s enough fun to be had with the imaginative murders and suspenseful pacing.

INTRUDER manages not to overuse the relevant clichés and can’t help but entertain for it’s ninety minute runtime. It’s Stylishly directed with a decent score, some innovative murders and a likeable if not overly talented cast. Although further success hasn’t found Spiegel as easily as it found Raimi, no one can deny this entry into our favourite sub-genre is easily one of the best. If you can get hold of the uncut copy then add a star to the score below, if not still try your best to seek out this movie. If only for the reason that along with MANIAC COP it remains one of the last great slasher movies to come out of the eighties.