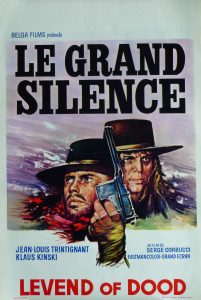 Without a doubt, one of the most overlooked films of all time. Watching THE GREAT SILENCE today, many of today’s viewers may find some “cliche’d” scenes, along with some distracting dubbing. But this flick packs much more than one can bargain for.

-Plot: Bounty Hunters are collecting paychecks by snabbing up bandits in late 1880’s Utah. A master gunfighter, “Silence”, is out to collect dollars by killing those same bounty hunters who prey on the helpless marauders. “But who are the REAL bad guys?” is a question that carries throughout the entire film. As I mentioned before, there may be some moments in this film that seem dated and familiar, but let’s focus on the un-familiar..”Silence” is mute, his throat slashed by bounty killers. Not only that, but he ALWAYS draws his gun in self-defense..Never draws first. And instead of arming himself with the traditional .38, “Silence” packs a Mauser C-96 (aka “Broomhandle”) drawing fear into those who stand in his way. What else? Well, since Capt. Kirk brought forth headlines by kissing Lt. Uhura on STAR TREK, director Sergio Corbucci goes all out for a full interracial love scene (Unthinkable at the time) . What else?? This bad-boy takes place in the cold, desolated snow-bound hills, where a lot of violent stuff just seems to always happen..In fact, the blood-red violence appears much more graphic than ever in the white-frozen snow. And of course, there’s the much-talked-about ending that is bound to slap EVERYONE in the face.

Here, Klaus Kinski proves that he was one of the most intense actors ever to appear in the 20th century. Just watch his movements/expressions during the last climactic scenes. Oh yeah, Ennio Morricone’s incredible music is presented through-out. Want more? Please watch this film…If you can get a hold of it!

0 229
The DeMille Of Dixie: Earl Owensby