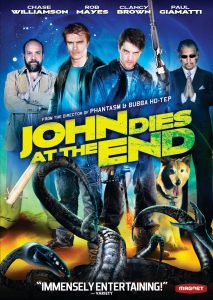 This film reminded me a lot of Naked Lunch crossed with Bill And Ted’s Excellent Adventure in some ways (if you’ve seen all three of these movies you’ll know what I mean). You have a guy (Dave) and his friend (John) who end up stumbling across a drug that opens their minds (both figuratively and literally) to another world. There is some good humor here and some of the scenes make you laugh (the meat man being one). The story is obviously over the top, but that is what makes this film fun to watch. You have to go in to this movie with an open mind (being under the influence might help to) and don’t take it too seriously, that being said I can see some people doing just that and they won’t get it. It has elements of horror, good old fashioned special effects – some new also, some comedy, and the obligatory nude scene. As I said, some people won’t like this movie, but I enjoyed it