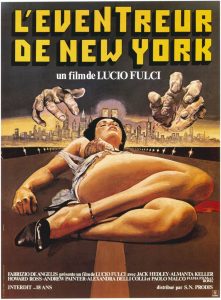 Though reviled by even some of the most ardent Fulci supporters, LO SQUARTATORE DI NEW YORK is actually one of the Italian maestro’s best works. The film belongs to the Italian “giallo” genre, a brand of thriller which emphasizes flashy murder scenes over pedantic police investigations, and in some ways it is the giallo to end all gialli. Certain scenes are so mean spirited and graphic that it is difficult to watch, but of course this is precisely what Fulci has in mind. The emphasis on gore and sleaze creates an image of New York as a Hell on Earth that makes TAXI DRIVER look positively staid, and Fulci uses the story to make some harsh comments on American life. Specifically, the American ideal of being the best in a given pursuit is what fuels the murderer’s rage. Those critics who believe Fulci to be an ardent Catholic, who feels that women who behave sexily deserve to be murdered, have had a field day with this film. Yet, these critics have failed to properly understand the film. Fulci is not an ardent Catholic (as NON SI SEVIZIA UN PAPERINO proves), nor is he condemning the women in his films. Rather, this is a film that paints a bleak portrait of human behavior. There are no sympathetic characters, and an air of hopelessness dominates the proceedings. The issue of mysoginy has no bearing in a film like this — instead of being anti-woman, this film is anti-humanity. Sure, it is not a pleasant premise on which to base a film, but then, who says that films have to be pleasant? A fine, well-crafted thriller, with good acting, beautiful widescreen photography, and a terrific score by Francesco Di Masi