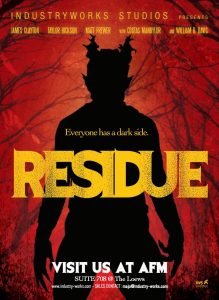 I’m just about never the one to complain that a movie is ‘too slow’. 4 hour silent Russian epic? Sign me up! But this movie got the better of me. I’m fine with slow if there’s a purpose. Letting a mood or scene sink in… letting characters establish themselves… but in Residue there were loads of scenes where nothing happened and while it established a good mood/atmosphere early on… after a while it just felt like padding. Stylish and good looking, but padding nonetheless.

No surprise then that this is a pilot for a TV show. That leads me to think it’s like one of those overwritten Stephen King novels that weighs in at 500+ pages when it really could have been a short story. As it is, since there is a mystery at the core of this setup it has me thinking Lost… do I really want to keep watching for some trumped up ending that won’t satisfy?

Also, the characters. If it weren’t a pilot then the main character would have been one of the three main ones here. As it is they’re all spread thin and none of them engage. The cop doesn’t do much of anything, the photographer just stares at her picture and types in her thoughts, her public relations boyfriend is the most proactive but even he doesn’t get much to do.

I came away irritated… lacking good will to continue on with the series. I just expect more drawn out stylish nonsense with no real tale to tell.