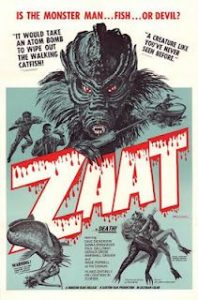 This film is a testament to the low budget, independent monster/horror flicks of the 60’s and 70’s. Man with a grudge, Dr. Kurt Leopold, transforms himself into a murderous “man fish” reeking revenge on all who have scorned him and anyone who gets in his way. Sure, the FX are non existent, the acting and dialogue amateurish, and the monster looks incredibly inane – a “man fish” with fur around the neck and back to hide the zipper! But that’s what makes these films loads of fun to watch! You have to admire these independents who often invest their life savings to produce these gems. Lots of heart and soul fuse this genre. Today’s excuses for cinema with bloated corporate budgets, over production, over paid prima donna actors, and excessive FX can’t compare to the spirit and zeal of this genre. Cinamatic hacks such as Spielberg, Scorsese, Lucas, and Coppola who prostitute themselves on a consistent basis can learn a lot from the likes of The Blood Waters of Dr. Z.