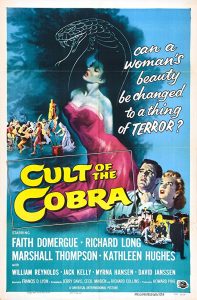 Set in 1945, six American GIs crash a cult that worships snakes, and are threatened to be killed, one by one, for their misdeeds. The setup is a bit long (about 15 minutes), but once they get back to New York City, the excitement begins. Faith Domergue is amazingly beautiful, and most alluring, as an Asian “Cobra Woman”, an instrument of death. Despite his third billing in the film, Marshall Thompson is her co-star, giving a strong performance as the GI who falls for her, and proves her ruin. He and the rest of the cast, Richard Long, William Reynolds, Jack Kelly and David Janssen, became more successful as television stars. Kathleen Hughes is also on hand as a pretty blonde love interest. Not much is made to recreate the era, it’s definitely 1955, via the clothes, makeup, hairstyles, etc. And when Domergue is transformed back to a human, she’s fully clothed! But as in most of Universal-International’s decade of science fiction/horror classics, which hold up better (and are re-shown on Cable and released to DVD/video) than their other output, save a few Douglas Sirk dramas, it’s well-written, photographed, scored, paced and acted.