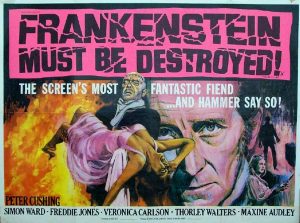 In order to continue his experiments, the Baron blackmails a young couple into helping him abduct Dr Brandt (a brilliant brain surgeon gone mad) from the lunatic asylum so that he can operate on him, cure his sanity and transplant the brain into another body. This he does by kidnapping and murdering Professor Richter and using the body to house Brandt’s brain. This he does because he wants to learn Brandt’s knowledge of brain transplants. However, when Brandt wakes up he escapes and plots revenge against Frankenstein.

The fifth Hammer Frankenstein presents the Baron as a totally irredeemable character, a cold calculating psychopath who will stop at nothing to get what he wants, even if it means destroying the young couple in the process. Cushing plays with his usual conviction and is aided by a reliable supporting cast including Simon Ward (in his first film appearance), Veronica Carlson and Freddie Jones as the creature. The direction of Terence Fisher is accomplished as is the lighting of Arthur Grant.