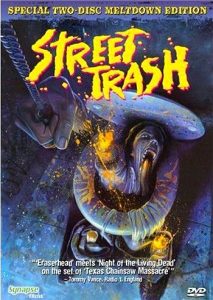 “Street Trash” tries so hard to be a cult movie with it’s nonsensical storyline, the over the top gore and violence and the weird characters. That’s the main problem with this film. Instead of being a charming little b-movie it turned out to be a somewhat annoying and seemingly endless obscurity. Example: there’s a scene where a bum gets his penis cut off and a bunch of other guys start playing Piggy In The Middle with it. Do you get the picture? This movie is begging to be loved by people who love the gross and the absurd and it’s all too obvious. Besides, “Street Trash” never seems to get anywhere. It starts of with a guy farting in another guy’s face, then some guy’s literally melting away and we think, okay, that’s what the movie’s going to be about. Then this storyline is completely abandoned and for hours and hours (or so it seems) we witness the everday life of a bunch of bums who live in little self made flats at a car dump. Obviously, for most parts this movie isn’t meant seriously (there’s a hilarious Robert DeNiro-like character called Nick Duran who curses in a ridiculously rude manner and who even gets to sing his own little song when the credits roll) but on the other hand the makers also seemed eager to gain the respect of horror audiences. As a horror movie “Street Trash” falls flat on its face. The gore effects are nicely done and there’s interesting steady cam work to be found here (I hear the director went on to work for James Cameron), but the epic length and the stupid plot of this film prevent this from being a success. If you just have a casual interest in the genre, avoid “Street Trash” at all costs and even if you’re a die hard-fan think twice about watching it. Sitting this one through really is a toughie.