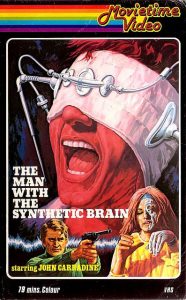 “Blood of Ghastly Horror” first began life as an unreleased Al Adamson heist feature from 1964 titled “Echo of Terror,” then with new footage of go-go dancers and a brutal stabbing slipped out from Hemisphere Pictures in 1965 as “Psycho A-Go-Go” (not to be confused with “Two Tickets to Terror,” in reality a rerelease title for 1961’s “Half Way to Hell”). Adamson shot new footage of John Carradine in 1966, resulting in a second release, as “Fiend with the Electronic Brain,” playing in selected Southern states as early as Dec 1967, courtesy David L. Hewitt’s American General Pictures. By 1969, still more footage was shot, with Kent Taylor and Regina Carrol (Mrs. Al Adamson), and still later Tommy Kirk, resulting in what producer Samuel M. Sherman accurately described as an ‘interesting editing exercise.’ The finished (?) product was issued in 1972 by Sherman’s Independent-International Pictures Corporation, simultaneously playing on television under yet another new title, “Man with the Synthetic Brain.” Only a devotee of outright schlock could really appreciate what remains, provided they possess the knowledge of its convoluted backstory. We begin with a zombie-like creature named Akro (Richard Smedley) committing several murders, switching gears to a police investigation conducted by Sgt. Cross (Tommy Kirk), relating the background on Dr. Howard Vanard (John Carradine, entering at the 17 minute mark), who had implanted an ‘artificial brain component’ into almost dead Vietnam veteran Joe Corey (Roy Morton). He succeeded in saving Corey’s life, but turned him into a homicidal maniac, later avenging himself on the remorseful Vanard by strapping him into his own device and electrocuting him (at the 37 minutes mark). Sgt. Cross now follows the trail of Dr. Elton Corey (Kent Taylor), father of the dead Joe Corey, who uses his voodoo powers to create the hideous Akro, seeking vengeance now against Dr. Vanard’s daughter Susan (Regina Carrol), with most of the final half hour consisting of the original unissued heist footage, and Joe Corey’s high altitude pursuit of stolen diamonds. As a director, Al Adamson displays a casual disregard for narrative competence, coupled with an inability to even focus the camera in the right direction, often leaving the performers off screen as they spoke. John Carradine is the biggest name in the cast, and is accorded top billing over Kent Taylor, who only enters at the halfway point, once Carradine’s bespectacled scientist bites the dust. Tommy Kirk is the other veteran actor, not what one would expect for a solemn police sergeant, but as the only actor to work with both Al Adamson and Larry Buchanan (“Mars Needs Women,” “It’s Alive!”), deserves a measure of respect for surviving such highs and lows in a screen career soon to fade. “Blood of Ghastly Horror” is undeniably a bad film, but “Horror of the Blood Monsters” reached a new low even for Al Adamson. Pittsburgh’s Chiller Theater aired this film once, July 23 1977, paired with second feature “The Black Cat” (1941).