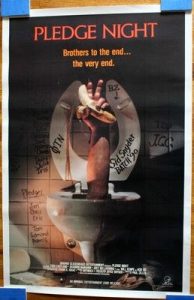 Pledge Night (1988) is a really good cult horror movie.The film is about Larry Bonner, a young college kid trying to get into this fraternity. He becomes friends with the other pledges as they all go through “hell week”, but once Larry’s mother finds out that her son is being hazed, she tries to tell him to leave the fraternity. Larry’s mother tells us her boyfriend, Sid, died in a hazing over 20 years earlier. Larry does not listen to his mother, until the ghost of Sid returns to wreck havoc on the fraternity. See, you should always listen to your mother! The first 45 minutes are very funny as the pledges have to do very “entertaining” games and rituals, such as the “cherry race”. As I said, the first 45 minutes of the film are amusing, it’s like watching Animal House or Revenge Of The Nerds. But, after the 45 minute mark, the film turns into your typical 1980’s slasher film (which is just fine!)complete with fairly gory special effects. This movie is hard to track down on vhs, but you can find a so called “uncut” copy on pal dvd through Dragon Entertainment.