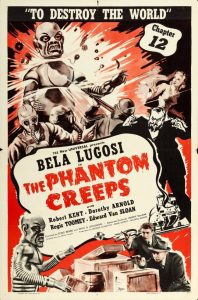 This is a serial, like the classic Radar Men on the Moon, and Buck Rogers. Unlike it’s compressed TV movie version (1949), this more protracted version of Phantom Creeps wanders all over the map at a frenetic pace.

The Phantom Creeps is everything an old classic B sci-fi serial is supposed to be. It features Bela Lugosi (as Dr. Zorka), a mad megalomaniac genius with a utility belt and a sack of gadgets that would make Batman and James Bond blush, against a team of CIA-types, a reporter, and local law enforcement. Lugosi hams up a storm and really seems to enjoy himself in this immensely silly role. His somewhat untrustworthy and dull side-kick, played by Jack Smith is a great foil to his overbearing stage presence, and he makes a truly great sadist! The film is replete with clever and creative (for its time) special effects (plane crashes, all sorts of random electrical currents, cloaking technology) and a lot of technobabble reminiscent of some of the less palatable Star Trek series. For an added bonus, the creators threw in a plot, and a cast of well developed, if stereotyped, characters.