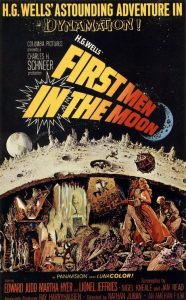 The opening contains a hook of the first manned flight to the moon where a British union flag is found and it’s discovered that Senior citizen Arnold Bedford was in fact part of an expedition who had visited the moon several decades earlier . So far so good but then the film spends almost a whole hour back in Victorian England setting up the characters of Bedford , eccentric inventor Joseph Carvor and Kate Callender . You’ll spend most of this running time trying to work out if Carvor is more irritating than Kate in much the same way as historians debate if Stalin was a worse dictator than Hitler . It’s not helped by the performances of Jeffries and Hyer

Things do radically improve when the trio take a long awaited trip to the moon and it’s very easy to see why so many people fondly remember this film . You could complain that the selenites are obviously small of stature ( Child ? ) actors dressed in cloth , some of the sets are unconvincing etc but at least director Nathan Juran has tried – And to a certain degree succeeded – in bringing a sense of wonder to the movie . It should also be pointed out that the special effects are very impressive for their day and still hold up well . Also take note of the eldritch sound effects for some of the scenes set in the selenite base and the chilling voice of the Grand Lunar

This is certainly a film of two halves and its glowing reputation is all down to the second half . It’s also a film where the effects from Ray Harryhausen are more important than the story structure . It’s a film that will almost certainly disappoint fans of the original novel and will equally disappoint fans of co-writer Nigel Kneale whose work here lacks the compelling intelligence of much of his other work