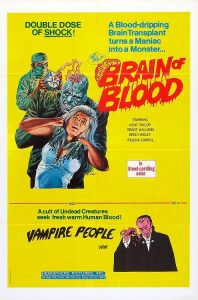 The ruler of the the nation of Khalid is dying, so he’s secretly whisked off to the States so that Dr. Trenton can transplant his brain into a new body. The disorganized doctor starts the operation without actually having a body to move the brain to, so when his mentally challenged, extremely large, facially disfigured servant Gor screws up getting a body, the doctor puts the brain into Gor. Naturally, the patient is not happy waking up to find out that he’s a giant with a badly scarred face. Mayhem ensues. Oh yeah … the doctor’s dwarf assistant keeps women chained up in the basement as blood donors (it seems that the good doctor is not worried about blood types), and one of them escapes.

If I had to pick a worst director of all time, I’d go with Al Adamson. People have made worse films than his, and at least a couple of his are mildly entertaining, but he has a long career of consistently not giving a crap about any of the films he made. That said, this one is one of his better films … barely. While it has VERY long stretches of nothing happening, it has about 10-15 minutes of inspired nuttiness. It was made around the same time as “Dracula vs. Frankenstein”, so both Dracula (Zandor Vorkov) and the Frankenstein monster (John Bloom) are in this one, along with Angelo Rossito and the ever-present Regina Carrol.