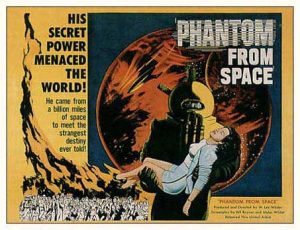 United Artists sure had a mess on their hands when they distributed Phantom From Space in 1953. The story is of an alien spacecraft that seems to have crash landed somewhere near Santa Monica, and the humanoid alien that runs around. The alien gets involved with murdering a couple humans, and also causes an explosion. It is later learned the alien most likely killed because it was being attacked by the humans. A manhunt for the alien is then organized. The alien is cornered but escapes by taking off his helmet and radioactive suit, which makes him invisible to humans. The suit and helmet are taken to a lab (We know it’s a lab because of the roughly made “lab” sign that can be seen.) It is guessed the alien will come to the lab for it’s helmet, which it needs for breathing most of the time. The alien shows up and soon the crime investigators, the scientists, and a dog are running here, there, and everywhere looking for either the alien or the woman who has encountered the alien. There is so much running around in the lab building that it becomes humorous; like a Three Stooges comedy. It is also humorous during all this running to see people slipping on the slippery floor in the building’s hall. These shots of people slipping slightly were either unnoticed while being filmed, or the director didn’t want to do another take. Much of Phantom From Space screams “amateur.” Some of the sci-fi elements in this movie are interesting (the invisible alien being viewed under ultra-violet light, the description of foreign gasses the alien breathes in its helmet) while other sci-fi elements do not seem likely. The movie seems more like a cops and criminal story than a science fiction thriller. Even the music sounds like a crime-drama score most of the time. There are several things in the movie which may cause unintended laughter; including the monotone narrator who begins the movie, and again speaks during other parts of the movie. Unintended laughter may also be brought about by some of the situations and dialogue in this movie, and by the acting. For the most part the acting is bad. Some actors display wooden acting. Other actors seem extremely amateur. The special effects are mostly bad when compared to other low-budget films from this era, and they may also lead to unintended snickers. Only near the end do the special effects seem better when the alien is seen under ultra-violet lighting. All the running around and silly situations make the movie seem more like a feature for children. The movie can be entertaining only if viewed with a juvenile frame of mind. Phantom From Space is a bad film, but may actually be a fun reminder of comic books and science fiction serials.