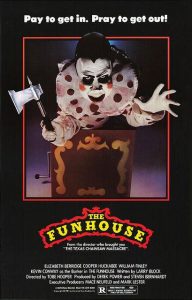 Two couples on a double date spend their evening at the local carnival, against the main character’s father’s wishes. Rumor was circulating that kids in another county were killed at that carnival in the past. But they ignore the father, craft a really thin lie (the old “sleeping at a friend’s house” routine), and go anyway. And then comes the big idea: stay overnight in the funhouse. This plan goes fine until the kids witness a fortune teller slash prostitute get murdered by the man in the Pat Sajak mask.

Tobe Hooper, the director, is a big name in horror. “Texas Chainsaw Massacre” and “Poltergeist” are modern classics. I don’t claim to be an expert on Hooper — I’ve seen only a handful of his work — but I would rank this near the top of the list. I have read other reviews calling this film, without hesitation, Hooper’s best work, and I think they make a strong case. While the least known of the big three Hooper films, it has a timelessness to it that will strike terror in people’s hearts forever.

Carnivals are scary. From “Carnival of Souls” to the more recent “Dark Ride”, the background of a circus can be chilling. Throw in some clowns, carnival barkers and automated robots (dolls that move) and you have the perfect set-up. You don’t really need a masked killer to heighten the fear, but Hooper throws one in anyway. If nothing else can be said about this movie, you can say the perfect atmosphere was created for winning film.

Beyond that, we have the same old horror standards. Teenagers making out, smoking pot and being stupid. We have a main character — Amy Harper (Elizabeth Berridge) — who is quite sexy, although her taste in men needs some adjustment (I’m sorry, but I thought Buzz Klemmet (Cooper Huckabee) was a jerk). And getting busy on the first date after not hitting it off well? Believable for some reason. Unlike her female co-star (Largo Woodruff), they find ways to get her topless multiple times in the film. I’m not complaining, but the real mystery is this: why didn’t we see her in more 1980s films? I think the defining moment for this movie is when the mask is removed from the killer. I won’t reveal anything that will spoil it, but I have to say that the man under the mask was quite the shocker for this first-time viewer. You think you know, but you have no idea.

Absolutely see “The Funhouse”. 1970s and 1980s horror is a defining era for the genre, and this film sits right near the top of some of the best works. Possibly eclipsing “Texas Chainsaw Massacre” and comfortably resting with “Halloween” (a film this one pays homage to in the opening scene), Hooper has made a name for himself. More recent contributions — such as “The Damned Thing” — are lacking, but classics like “The Funhouse” will guarantee him a slot in the Horror Movie Hall of Fame, if such a thing existed.