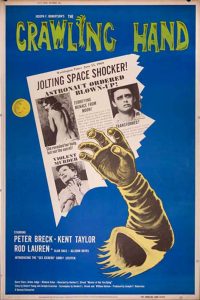 THE CRAWLING HAND looks like something straight out of the 1950s, when TV was beginning to upset the Hollywood applecart, forcing the major studios to look for new angles and gimmicks (Todd A-O, Cinemascope, VistaVision, Cinerama, 3-D, stereo sound, and big-budget color remakes of old films) and small indie directors like Ed Wood were having a field day turning out tons of drive-in drivel. HAND is about a dead astronauts’s severed hand seeking revenge on the living. Yowsa! How’s that for a plot! In some scenes, you can actually spot the uncredited actor whose hand is doing the crawling. Considering HAND is from 1963, I am a little surprised as drive-ins by then were on the wane and no self-respecting movie house would have been likely to show this. It is a terrible, wooden movie, with poverty-row sets, little or no action, a virtually nonexistent script, bad music, uncorrected sound and so on. But … for true film buffs, we get to see a very young Peter “Big Valley” Breck, veteran leading men Kent Taylor and Tris “King of the Rocketmen” Coffin, a pre-“Gilligan’s Island” Alan Hale and the alluring Alison “Attack of the 50-Foot Woman” Hayes. A rather unusual cast for a no-budget movie. I guess they were taking what they could get in the dawning era of color TV and the collapse of the studio system.

0 18
Roots Of The HeadHunter