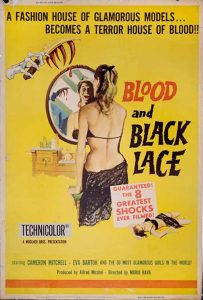 A Fashion House is being plagued by a mysterious masked serial killer who is picking the girls off one by one in a variety of gruesome ways…Why this Maniac is killing these girls is academic to the plot, as this film is STYLE driven and what style it is too…..we are of course as in any good thriller suspicious of everyone…Is the Killer a Man a Woman or is there more than one Killer….Bava takes great pleasure in teasing us into believing all of these at some stage……This is the Third film in my indoctrination into Mario Bava and it is again no disappointment…..Bava’s use of light and shadow and of mirrors and reflection is stunning and never has colour been used so brilliantly and not just gaudy reds blues purples yellows but subtle use of pastels too……The fashion scene is perfect for Bava’s visual flair with its very beautiful models and Haute Couture and both are given sublime treatment…….The score is also very memorable and reminiscent of Henry Mancini at his best……The killer bears an uncanny resemblance to Freddie Krueger only much better…..now don’t tell me he wasn’t an influence on the makers of Nightmare on elm street…..Even though this was dubbed it has one of the best dubbings I have seen and is not intrusive on the film…. You know some times you hear of certain directors or films that are just Brilliant Magnificent or Unmissable and How often have you been disappointed and wondered what the fuss was all about….Mario Bava is not in that category….He is a master of style and cinema…..To tell you I was dumbfounded by the films I have seen so far is an understatement….I was expecting cheap nasty gory and under-produced films that had some charm….. but what I got is one of the greatest and most sumptuous of Cinematic experiences….The Man truly is a Cinematic God…He is the Orson Welles of Horror and that means a lot coming from me……this film is Simply Wonderful