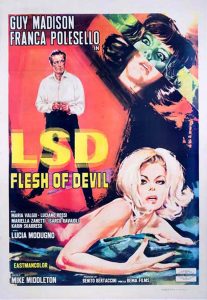 The film opens with a nasty scene: a young boy uses his toy car to blow up two men and a blowgun to murder a third. This killer kid is none other than Rex Miller who professes to want to grow up to become a secret agent. And indeed he grows up to be Guy Madison, a spaghetti western star who has the distinction of being in two of the strangest spy flicks of the era; this one and The Devil’s Man (67). Here, Madison, as Rex, is a secret agent working for an undisclosed country when a bizarre plot is uncovered to take over the world by dosing important `nerve centers’ with potent LSD.

The film postures itself as being anti-drug of course. The LSD trips represented are only somewhat hallucinatory using minor tricks of lighting or superimposition to portray the wild effects of the drug. There isn’t much imagination (or money) spent on convincing us of the horrors of LSD so these sequences are unfortunately rather dull and repetitive which in turn makes the drug seem like a boring way to amuse oneself.

The best line in the film is spoken by the villain, Mister X, as he describes his international crime syndicate: `We’re a secret organization with a strange name: ECHO.’ Finally, the film boasts an excellent sound track by Egisto Macchi. There’s plenty of catchy tunes and thrilling motifs for spy music fans that easily outclass the visuals.