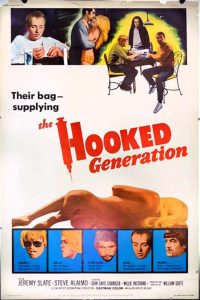 “The Hooked Generation” derives most of its entertainment value mainly from being a hilarious, off the wall relic of its era. It’s not exactly quality filmmaking; Hell, it’s far from it, but it’s a hoot just the same. It’s definitely way overlong, and could have used better pacing and more action. But the antics of our terminally stupid antiheroes are endlessly amusing, and the performances from this bunch take on the tones of a cartoon. Yeah, subtlety is also in short supply here. The absolute highlight has to be the “psychedelic orgy” sequence with the character Acid: this is a sequence that truly deserves the description “trippy”.

Produced, directed, and co-written by Florida-based drive-in legend William Grefe, it stars the memorable trio of Jeremy Slate as Daisey, Willie Pastrano as Dumb Dumb, and John Davis Chandler as the aforementioned Acid. These guys are wannabe big time drug dealers who think they’re getting screwed by their Cuban supplier and slaughter the man and his crew. Soon, the Coast Guard is on the scene, and *they* all get killed too. A boy and girlfriend do- gooder couple, Mark (Steve Alaimo) and Kelly (Cece Stone) who witness the massacre subsequently get taken hostage. Eventually, our merry band of morons try to unload the drugs but can’t since the drugs are hot. The FBI pick up their trail and close in, and Daisey and Dumb Dumb head for the Everglades with their captives.

You gotta love any movie with the heroic lead detective trying to egg the bad guy on by repeatedly calling him “loser”. Slate, Pastrano, and especially Chandler are a bunch of glorious goof balls, while Alaimo manages to keep a straight face. The rock score is groovy and even though the movie itself is quite crude, the actors keep things watchable. Stone supplies all-important eye candy, particularly in a nude scene.

Keep an eye out for exploitation movie legend William Kerwin (“Blood Feast”, “Two Thousand Maniacs!”) as one of the FBI men.