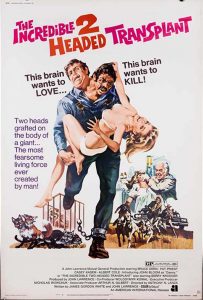 There’s no doubting this is a very bad film by anyone’s standards, but it isn’t without some entertainment value. Bruce Dern – clearly on his uppers back in ’71 – takes on the mad scientist role with such laid-back indifference to the part that his performance alone is worth the cost of the rental or purchase or ninety minutes of your life. Never will you see an actor so clearly embarrassed by the rubbish he has somehow found himself saddled with or trying so hard to appear invisible. Dern speaks each of his lines with a kind of preternatural calmness that leaves you wondering whether some underhand producer hasn’t drugged him so that he believes he’s floating through a dream. His character is assisted by Max (Berry Kroeger) who, quite frankly, is the creepiest thing in the film – like a strange uncle whose lap your mum warns you not to sit on when you’re a kid…

The plot follows the typical monster-movie template. Once again our monster is stitched together from people’s body parts in a fortress-like laboratory to which access is denied to the good doctor’s long-suffering wife (Pat Priest). But, unlike Frankenstein, this is no meditation on the dangers of man playing God, rather than a frank attempt to titillate undemanding teens. Of course, wifey can’t resist having a peek in the lab and before you can say ‘don’t open the door!’ she’s opened the door and – well, I’m sure you can get the rest.

The poor simpleton who has a maniacal killer’s head grafted onto his neck (don’t you hate it when that happens?) is something of a giant, and he’s filmed from a low angle so that no money has to be spent on special effects. I’m sure Messrs Bloom and Cole must have been pretty close friends by the end of the shoot. Of course the killer quickly becomes the dominant partner and forces his neck-mate to embark on a killing spree. He lumbers around the countryside, chancing upon necking teenagers and wasted bikers who, for some reason, find it impossible to outrun him and, cackling wildly, summarily dispatches them for no apparent reason other than he’s completely bonkers.

The single moment of any worth in the film is the point at which director Anthony Lanza cuts away from the murder of the female biker, just as those brainless cackles are beginning to rise. It’s a moment of restraint totally at odds with the rest of the movie.