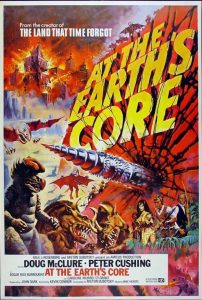 Dr. Abner Perry (Peter Cushing) is a Victorian era scientist who is about to take his revolutionary vehicle, capable of boring through the Earth, on its maiden voyage. Accompanying him is former student turned businessman David Innes (Doug McClure). The vehicle is more powerful than they thought, and they end up deep inside the Earths’ core. Here they encounter a nonstop assortment of monsters, a kingdom named Pellucidar, a tribe of primitive people, and their subhuman captors / tormentors, who pray to dinosaur gods.

Now how can you resist any hokum featuring those elements? Produced by Amicus, and scripted by Milton Subotsky (based on the novel by Edgar Rice Burroughs), this is decently executed by director Kevin Connor, who was a real go-to filmmaker for this kind of fantasy material in the 1970s. McClure is a jut jawed hero, and Cushing seems to be relishing a rare opportunity to ham it up. His performance may not be one of his most accomplished, but it’s certainly a fun one. Caroline Munro is *extremely* alluring as cave girl Dia. Also performing this amiable nonsense with straight faces are Cy Grant as the helpful Ra, Godfrey James as the stolid Ghak, and Sean Lynch as the devious Hoojah (just to be sure we get the point, Hoojah is nicknamed “The Sly One”).

The movie begins in grand style, with some striking opening titles and a beautiful, rousing piece of music. It promises a solid diversion, and that’s what it delivers. The understandable criticisms often leveled at the production are its obvious budget issues, and rubber monsters. But these monsters are just so damn amusing, especially the exploding fire breathing frog. All of this is done in an agreeable tradition of the Saturday matinée feature. The sets and the visuals are reasonably impressive, and Connor keeps things moving along nicely (the movie hits the ground running), and building to an exciting and destructive finale.

“At the Earth’s Core” does put a goofy smile on *this* viewers’ face.