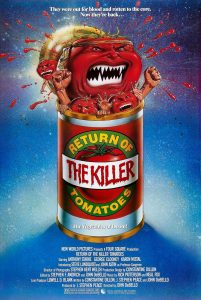 Picking up a couple of years after the original, tomatoes are now banned – which has ruined the pizza industry – and the unseen mad scientist who chalked up those giant killer tomatoes in the first film, Dr. Gangreen (John Astin) is up to his old tricks again, only this time he’s using music to make tomatoes into people, and depending on the type of music being played, that determines who/what the tomato becomes. Playing sexy jazz music produces sexy blond tomato women, playing Salsa music produces Carmen Miranda, playing Church music produces the Pope, playing pop produces either a pre-white Michael Jackson look-a-like or a Don Johnson look-a-like, or if you play rock music, you get big, burly military tomato men.

As Charlton Heston’s character from “Soylent Green” would say: “The killer tomatoes are PEOPLE!”

Our hero, Chad Finletter(Anthony B. Starke) falls for the attractive one time tomato Tara (Karen Mistal). Unfortunately, Tara can be changed back into a tomato whenever she hears a certain musical chord.

Full of gags (like the aforementioned multiple musical interpretations of a tomato) that include a prison dividing its cells between “Really bad guys” and “former political aids”, the mime stalking Chad & Tara during their musical montage dating sequence, pot shots at how films have to feature tons of marketing in order to have a budget to get made, pot shots at bad movie marathon hosts and game shows, and let’s not forget MY personal favorite, the talking teddy bear that calls out for help when Rock Peace tries to smother it. Film also features a more coherent “plot” (as it were) and served as the blue print for the animated series that later aired on Fox Kids.

Keep an eye out for it. George Clooney makes his film debut as Chad’s friend and pizza co-worker Matt.

0 141
Is Crowdsourcing The Future Of Film?