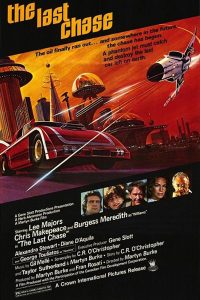 In a fuel-starved future, the totalitarian government has just impounded all private vehicles. Twenty years ago, the world was ravaged by a mysterious disease. Race car driver Franklyn Hart (Lee Majors) lost his family during the epidemic. Hart is now the spokesman for the mass transit system. He is being investigated for breaking into the impound lot and in danger of re-education. Ring (Chris Makepeace) is a hacker anti-authority boarding school student. Ring goes on the run from the police and gets Hart’s help to drive to “Free California”. The government has to stop this symbol of personal freedom. They bring out Vietnam vet Captain Williams (Burgess Meredith) and an F-86 Sabre jet.

This is a rally for driving freedom in response to the speed limit. There are a couple cool things in this movie. However at its heart, it’s a non-sensical cheesy Canadian production. I like the operations room although I wonder if it’s recycled from another movie. The world in the movie makes little sense but the idea of the freedom of the road is very appealing. Burgess talking to his plane is kind of funny. The movie probably needs more comedy and not the unintended kind.