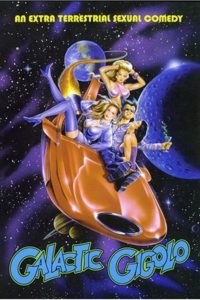 The people who made this movie previously made the cult movie “Psychos In Love”, a movie that I found funny enough to justify buying it on DVD. So my expectations were pretty high when I put “Galactic Gigolo” in my DVD player. This effort does have a somewhat higher budget that “Psychos In Love” (there are a LOT more actors for one thing), and occasionally there is a sight gag, a one-liner, or some other attempt at humor that makes you smile. But otherwise, this movie is a complete failure. The movie feels like it was being made up as it goes along, with no proper story and character motivations that are murky. (The character of “Eoj”, who should be the central figure, is actually kind of an afterthought frequently.) But the main reason why the movie fails is that it is extremely unfunny, using tired stereotypes, unimaginative gags, and feeling that people running around and screaming is hilarious. Skip this movie and rewatch “Psychos In Love” instead.