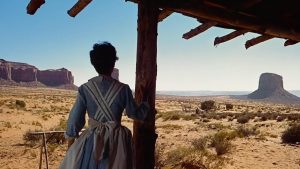 Where is my John Wayne

Where is my prairie song

Where is my happy ending

Where have all the cowboys gone

As pictures of Harvey Weinstein smirking and being led into a New York Police Station in order to be charged with rape and other deep abuses of his power filled my computer screen, it was apparent that the Hollywood system as I knew it was in its death throes. The icons were falling rapidly and the machine that produced both power and celebrity for better or for worse was grinding to a final stop. I had gone to see the latest Star Wars iteration the night before and it became clear that the next evolution of the movies was taking place in a final and abrupt manner.

At one time, the leadership at Sony Pictures thought it had a ticket to the gravy train, Sony owned the rights to Spider-Man, and with the attachment on Evil Dead director Sam Raimi and a leading man in the form of rising star Tobey Maguire made a movie that for the most part was well thought of. It did well at the box office and even non comic fans seemed to enjoy the movies. Sony was well on it’s way to comic book gold. They really thought the SpiderMan franchise would ensure a good part of the studios future.

Behind the scenes the good folks at Marvel hatched a plan. In 2008 they launched Iron Man and the die was cast. Sony’s plans faltered. In 2009, Disney bought Marvel for four billion dollars. The pipeline of intellectual property that was stored at Marvel was cut off from competing studios. In 2012, Disney acquired Lucasfilm, and the its jewel, the franchise known as “Star Wars,” By the year 2015, Disney was releasing one new movie from the “Star Wars” universe and two or more movies from the Marvel universe every year.

In his recent book, The Big Picture, The Fight For The Future Of The Movies author and a Wall Street Journal reporter shares a telling fact in 2005, the highest-grossing film in China was “Harry Potter and the Goblet of Fire,” which took in just under twelve million dollars. In 2017, a “Fast and the Furious” sequel made almost four hundred million there.” The world change, it got bigger and the American story as well as the dominance of its market was diminished.

Today, the major movie tent pole franchises are indestructible because they provide moviegoers global and enduring universes that their hordes of fans and admirers are desperate for. These tent poles are now the foundation of profit and are Hollywood’s sole financial foundation. The business model began to shift in the mid eighties when the impact of Mr. Lucas’s invention Star Wars started to be realized, gradually, in the eighties; later a writer’s strike coupled with a global economic crisis pushed forward the re-invention of the Hollywood model. Netflix launched it’s streaming service in 2007. This as well all now know was a gamechanger. It was announced today that Netflix now had a larger market evaluation that Disney.

Netflix, with the proliferation of their Red Envelope physical rental distribution , created a substantial loss of revenue in regards to DVD sales. The studios with now the reduced DVD sales revenue streamlined their release schedules and started looking long and hard on the globally accessible more of their efforts on the tent pole machines: Marvel, DC, “Harry Potter,” and of course “Star Wars.”, and thanks to China “Fast and Furious” is now an enduring franchise. Our beloved and hundred year old movie business quickly went from an industry dominated by a handful of actors with amazing star power to an industry shaped by the rights to an enduring intellectual property or franchise. This brought the era shaped by stars and star power to a sad close.

The value of movie stars has fallen over the past five years. Now movie studios are opting to spend their money of CGI rather than attaching a big name to their project. Studios would rather spend their money on effects than big names. The days are long gone when movie stars could demand 8 figure paychecks. Now “stars” are lucky to get a small piece of a back-end deal. I look on Netflix and I see names like Al Pacino, Robert DeNiro, Julia Roberts and even Tom Hanks advertised with movies who have not seen the flickering light of a movie screen. It’s depressing.

Dominating movie screens for the past ten years, the superhero movie has plunged a knife into the chest of the idea of the movie actor as hero. The character became more important than the actor playing them, Spider Man has seen a parade of actors playing that Marvel character in recent years. In this world Rick Blaine became more important than Humphrey Bogart. It didn’t really matter who Batman was as long as the black rigid cowl made an appearance. The quality of movie acting has changed, the craft of the American trained actor seems to have been diminished, actors by the score are being hired out of the United Kingdom. Behind the scenes interviews from The Waling Dead reveal that at least fifty percent oi the actors are British trained. The bottom line is that from a human bonding experience a minimal standard of empathy is not being met between actor and audience. Half the performances in the recent installment of the the Planet of The Apes franchise were CGI enabled performances. Long dead Peter Cushing made a re-appearance in a recent Star Wars movie, Rogue One. As I watched the latest Star Wars installment I came to the realization that in many ways Hollywood Studios have sold their souls to the Devil and there was little chance they were getting it back.

This year, Netflix will release more original movies than Sony, Disney, and Warner Brothers combined. Netflix is in the deliberate process of removing the dominance and the importance of the theatrical release, their goals as it always has been is to make streaming the dominant distribution outlet for our movies. As Disney launches it’s streaming services, a further momentum away from the theatrical release model will have been created. Disney with a predicted acquisition of Fox will control 40.4% of the theatrical market, this is enough power to truly define the market exclusively.

In many ways, as shown by the latest Marvel Avenger’s movie, the movies are being seconded by the technology and storytelling defined by video games…..bad video games. The importance of actors is quickly fading and the actors who have defined our movie going experience are seeking refuge and employment with the various streaming services. I have a problem empathizing with Iron Man or finding attachment in the character of Thor.

One of my most beloved movies is American Graffiti, directed by George Lucas of Star Wars fame. It is in my mind on the op of the mountain when it comes to teen films. American Graffiti is a funny, nostalgic, and bittersweet look at a group of recent high school grads’ last days of innocence. In many ways it tells the story of when America still maintained it’s innocence before the assassination of Kennedy and the advent of Vietnam. It is true, it is honest and I can associate with everyone of the the characters on screen.