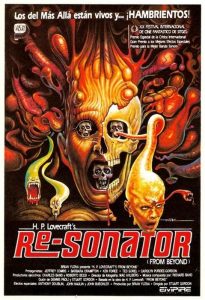 H.P Lovecraft had a twisted imagination. Director Stuart Gordon and writer Brian Yuzna equally so. The team who brought us the excellently morbid black horror/comedy “Re-Animator”, present us with another tasty Lovecraft nightmare of kinky sexual ecstasy and luridly graphic terror in the frame of “From Beyond”. From the story, to the special effects and atmosphere everything comes off resourcefully artistic and grippingly bizarre. Not only does it want to gross you out with its repellently heinous make-up FX, but also draw you into a satirical variant of the pleasure to seek out forbidden knowledge. This quest is a fixation, with sexual stimulation and escalating fear gelling together to construct a desirably moody mind trip of psychedelic colour and shades. Gordon’s competent direction is highly stylised and reworks grisly jolts to perfection. Even the gloomy atmosphere holds tight, and smothers any sort of hope with total bleakness. Yuzna adapts Lovcraft’s nine page story to a feature length premise, and he does a splendid job in keeping it impulsively smart and provokingly bold within a brief framework, but some laborious spots in the script eventually creep in. The dark tongue-in-cheek humour is there, but unlike “Re-Animator” it’s deviously slight in manner. It features a likable worthy cast of horror favourites. Jeffery Combs, Barbra Crampton (who looks great in bondage), Ken Foree and a superlatively loony Ted Sorel in impressively gooey make-up. Richard Brand’s accomplished, racy music score incorporates a shuddery intensity that works with the deliriously erotic pull. This is probably my ideal Brand score. While I might prefer “Re-Animator”, this freaky cult-fave is not far behind.

0 176
The Glory of Downtown Movie Theaters