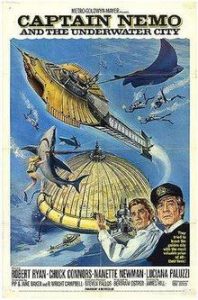 Sequel to “20,000 Leagues Under the Sea” (the Disney version) and prequel to “Mysterious Island” (1961 version) relating the further adventures of Jules Verne’s Captain Nemo and his submarine community. As in those two films (and the Jules Verne novels by the same name), shipwrecked survivors are rescued by Captain Nemo and in this case, taken to his underwater city. Robert Ryan is no James Mason and brings the plot to a sleeping halt with his monotone delivery and wooden appearance and Chuck Connors is terribly miscast as the head of the survivors, however director James Hill (“Born Free”) excels at filming nature and the film comes alive whenever people interact with animals such as a shark attack. Jules Verne stories are always fascinating and some of the set design is inspired (including an underwater resort-style swimming pool shared by children and penguins!). Really fun to watch as a trilogy since the story line holds together from one film to another (despite different producers and film studios!)