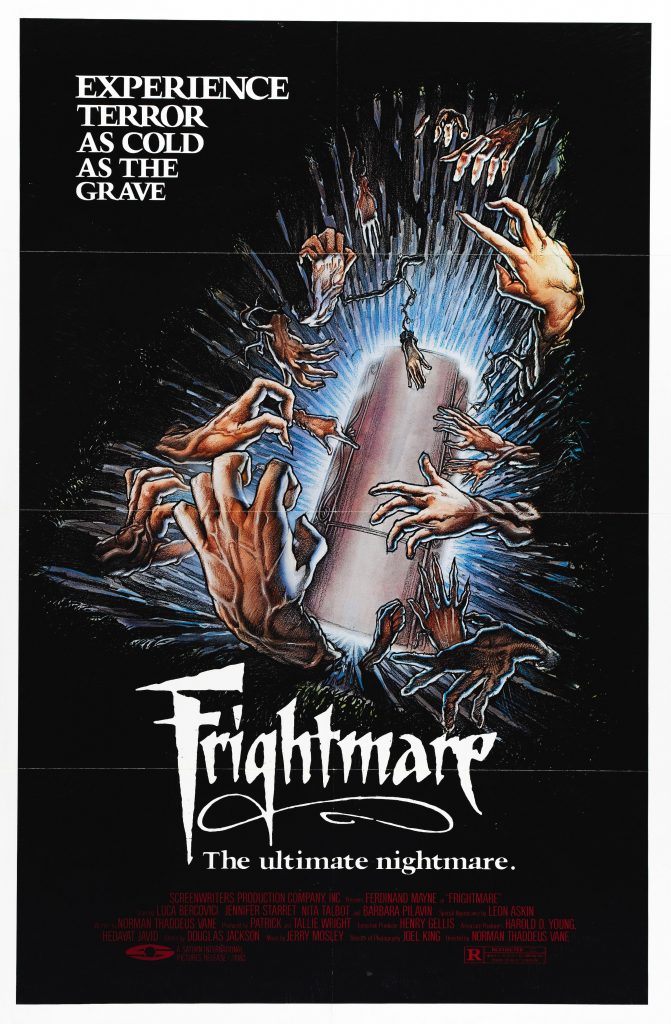 One of the last surviving horror screen greats – Conrad Radzoff – dies and has his body placed in a mausoleum with televised-before-death snippets of the great Conrad greeting you as you visit. Unfortunately for him and his captors, Conrad’s body is “borrowed” by a gang of four boys and three girls and taken to a huge manor where they drink with him, toast him, dance with him, laugh with and at him, and then put him to bed in a casket which just happens to by lying in a room upstairs. News of the missing body reaches Radzoff’s widow and her friend(who happens to be proficient in the black arts) and she holds some kind of ceremony that brings Conrad back to life so he can, in his own words, get “an eye for an eye, a tooth for a tooth.” Well, Frightmare is an interesting “bad” film. Sure, it is cheap. The sets look like they were borrowed(which I am sure they were). The special effects and blood and guts are done liberally and with little credibility. The acting is average to below average with a few exceptions. Jeffrey Combs of Re-Animator fame is in tow, but really he does little in this rather thankless role as a horror obsessed teen that needs to steal a dead man’s body for kicks. None of the “kids” except the pretty girl playing Meg is any good. Nita Talbot plays the “friend” of the Radzoffs with withering interest. Also, look for the big – I mean big – guy that plays the policeman. That is Porky himself of Porkys fame. But thankfully for all of us, one performance does rise above the material. Ferdy Mayne, an oft overlooked actor from Germany who had Christopher Lee features and did star as a vampire in The Fearless Vampire Killers, does a more than commendable job as the aging horror icon in public life and a real demon of a man in private life. Conrad Radzoff in a bad human being in life, living solely for his own pleasures and we see him kill twice before he is even dead(obviously none of the swinging teens at that point). Mayne is able to look very regal, speak very elegantly, and convey menace with ease. If for no other reason, one should see Frightmare for his performance. I do; however, believe that when they showed black and white clips of Radzoff that they used Christopher Lee footage(anyone have any thoughts?). Anyway, one can guess what happens and it does indeed: Radzoff goes out and goes after the kids that disturbed his peace. Again, the formula is trite and overused. The acting for the most part is anemic, and the direction oh so ridiculous. But Mayne gives a good performance in a sea of ineptitude. Definitely worth a little peek. Watching Mayne keep popping up on screens in his mausoleum brought a wry smile to my lips each time.