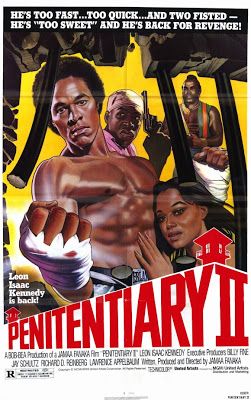 The second film in Jamaa Fanaka’s trilogy has Too Sweet (Leon Isaac Kennedy) out of prison and living with his sister. He tries getting a new relationship going with a young lady but she’s brutally murdered by the gangster Half Dead (Ernie Hudson). Deciding to do something positive with his life, Too Sweet starts taking boxing lessons where he hopes to become a champion.

The first film in the series was a rather insane and over-the-top masterpiece of cult cinema. The movie was highly entertaining but a lot of its entertainment came from how silly and bad it was. PENITENTIARY II is even campier and more over-the-top so if you enjoyed the first film then there’s no question that you’ll be laughing at this one. Everything that was so insane about the original is pretty much done here just just even more batty.

I’m not even sure where to begins but I guess the funniest thing about this picture is some of the really awful drama that leads to some of the biggest laughs in the film. The perfect example would be early on when Too Sweet is with his girl and her over-dramatic response to him trying to get some sex. The incredibly awful next scene involves Too Sweet breaking down crying and I dare anyone to watch this and not start laughing.

The film also has some pretty wild fights throughout, which is another major plus. There are quite a few bloody battles but strangely enough they aren’t nearly as good as what we saw in the first film. Some other highlights include a dwarf (Tony Cox from BAD SANTA) trying to get laid. There’s a sequence where former boxing champ Archie Moore comes out of no where for a cameo. Then there’s another sequence where Half Dead pours potato salad on his woman only to then start eating it off of her! Kennedy doesn’t give what you’d consider a “good” performance but he at least manages to hold your attention through the film. It was a lot of fun getting to see Hudson here in an early performance playing a nutty psycho. Then there’s Mr. T who plays one of the trainer and yes, you get to see him and Hudson go at it in a great fight. Oh yeah, the previous mentioned Cox is also a blast. There are some really bad performances scattered throughout the film that add to the camp factor.

PENITENTIARY II is certainly an awful film on many levels but if you like this type of badness then dig in.

0 58
The Dark Night of Joel Goodson: A Reflection on Risky Business