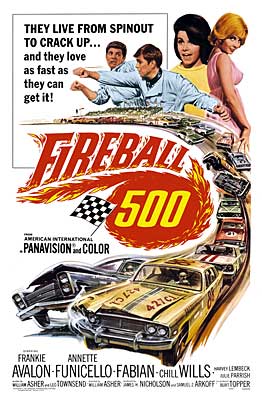 This is a fairly innocuous little movie. No one rented tuxes for the 1967 Oscars for this one, but then no one is paying large sums of money to suppress it, either. It feels like a “Perry Mason” or “Route 66” TV episode.

For vintage erotica fans, there is a (mostly) accurate portrayal of the “Girlie Shows” that were once carnival staples. Fabian’s character, Leander, has a group of young women following him around (Four of them period Playboy Playmates) and there is a seductive (slightly) older widow. The sex and romance is far from explicit (welcome in a movie with Chill Wills in it!) and is generally hinted at with meaningful glances.

For NASCAR fans there are some pretty good scenes of stock car racing 40 years ago, including some of the Daytona 500. Drivers that year apparently were racing for a $85,000 purse. (2006: $18 million).

It’s well worth a rental. I bought mine as a two-sided DVD with “Thunder Alley” for under $15, and I feel the money was well-spent.