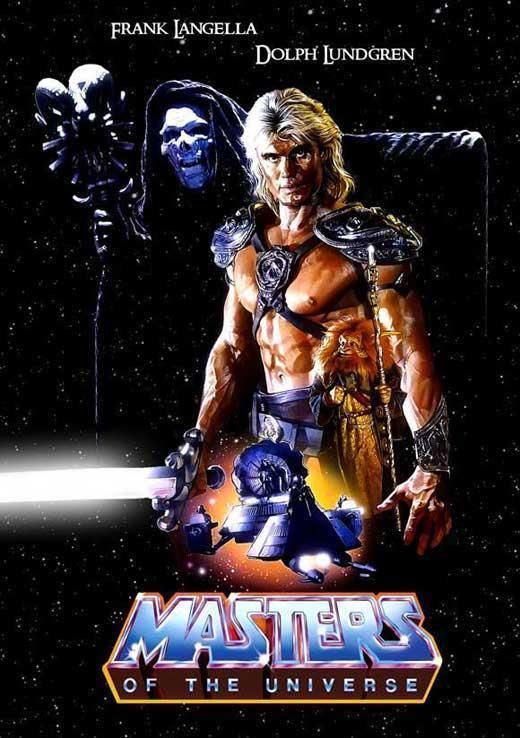 A corpulent hero named He-man , a veteran warrior (John Cypher), his daughter (Chelsea Field), a likable midget (Billy Barty) fight in Eternia against a vile villain named Skeletor (Frank Langella as a Darth Vader clone) in a fantasy/Sci-Fi about rebel forces battling for the sake of freedom and engaged in a life or death war with the tyrant leader of a far planet . They transport themselves by means of a mechanism that creates a time hole to earth in which nothing less the future of the universe is at stake . There they meet an intimate and youthful couple ((Courney Cox , Richard Duncan). Meanwhile , Skeletor wants to get a chance by destiny to receive the powers of Grayskull.

This is a big-budgeted live-action rendition of the cartoon roles’ feats in the ¨Star Wars¨ mold and characterized by He-man , Skeletor and many others . All of them blend together with wonderful and terrific special effects courtesy of Richard Edlund and special designs by Moebius .¨Masters of the Universe¨ is basically numerous spectacular fight-scenes with a tiny bit of plot movement, full of sympathetic dialog and flashy blasts of light and energy . It features stunted and disjointed action, as well as the hilarious but quite conventional characters fitting partially to animated series . The abundant breathtaking images , which labor mightily to reproduce the source materials in some impressive scenes and eye-popping look .

After his nasty roles in in ¨Rocky 4 (85)¨ and ¨A view to kill(85)¨ , the Swedish muscle mountain Dolph Lundgren starred this film and followed by ¨Red Scorpion(90)¨ and ¨Universal soldier(92)¨ in his successful period during the 80s and early 90s . Lundgren has enough acting ability and charisma to play this kind of heroes . Based on cartoon and famous toys by ¨Mattei Inc¨ that proved to be one of the biggest of all time . The characters and story may aim a little more at kids than teenagers and adults. For comic relief is in charge of Billy Barty with his antics and jokes . Other support actors making brief appearance are James Tolkan and Christina Pickles as the imprisoned sorceress . The special effects are all they’re cracked up to be and set a new cinematic standard for realistic realization . Action scenes have the zip and excitement you’d expect . The motion picture is well directed by Gary Goddard in his only realization , subsequently he dedicated to production and 3D . This would-be epic about ¨ Sword and witchery¨ is an entertaining romp through space and time .