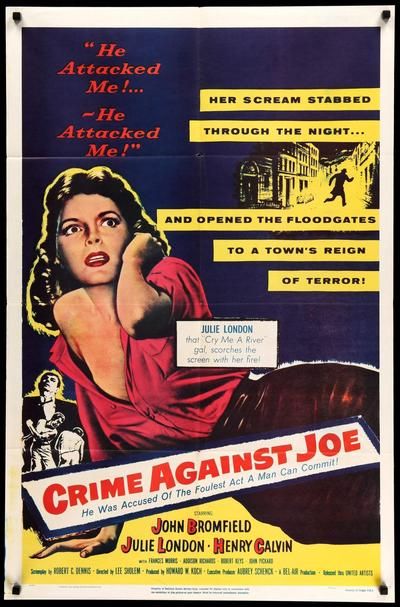 John Bromfield is Joe in “Crime Aganst Joe” a 1956 B film also featuring Julie London, Patricia Blair, Joyce Jameson, Alika Louis, Rhodes Reason and Henry Calvin. Bromfield plays an artist who lives off of his mother (Frances Morris) and laments not being able to find the perfect woman. When a bar singer (Louis) winds up dead after he’s left the bar dead drunk, his high school pin is found next to her body. He then becomes a person of interest to the police. Joe has an alibi – he actually ran into a sleepwalker (Blair) and returned her to her home, but her father lies to the police about it. Joe is then arrested. Joe’s waitress friend Slacks (London) lies to the police about seeing the singer with someone else, and Joe is released. He’s determined to find out the identity of the killer – someone from his high school class.

Supposedly the story was by Decla Dunning and the script was by Robert C. Dennis. I’d love to know which one was responsible for the sleepwalker bit and that whole subplot of the overly possessive father who discourages his daughter’s dates – it’s a riot. That plot line just sort of died out and wasn’t fully resolved. And that business of the high school pin…well, this is a pretty flimsy film, and I figured it out fairly quickly. It’s made very cheaply, too – the sound in all the interiors has an echo. Julie London is slightly miscast as the waitress friend – if the singer hadn’t gotten killed after just one song and a few lines, London would have been perfect for that role, and it would have given her a chance to be her usual glamorous self. The murdered singer, however, played by Alika Louis, is very attractive and a great type. Blair as the poor repressed sleepwalker is very pretty in full makeup and perfectly coiffed hair as she sleepwalks in her nightgown. Bromfield’s acting is loud and not very good or believable, but I liked Frances Morris, who played his mother. Nice of her to support him, but from the looks of those canvasses, he wasn’t going to be making much of a living painting.

0 25
The Joy Of Concessions