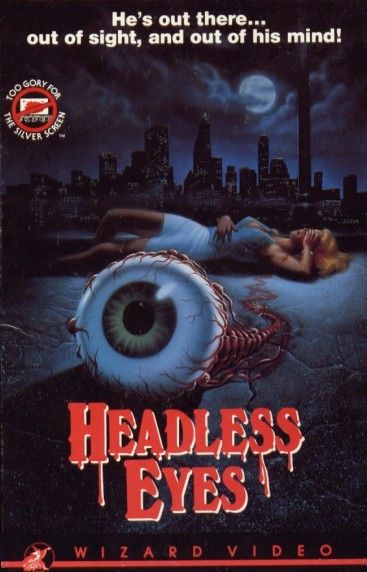 Long ago(the mid eighties, before it became chic to diss bad movies and glorify their ineptitude), I caught this freaky flick the way nature intended, on a late-night horror show on an independent TV station. Even then, before the advent of our culture of irony, I knew I’d seen something so unrelentingly bad that it was remarkable. This movie concerns an artist who, while attempting to rob a sleeping woman to get rent money, has one eye put out by his victim. Driven insane, he goes about the unnamed city where he lives(New York), encountering various people, killing them, then attaching their eyeballs to mobiles and suspending them in blocks of acrylic. The victims include a boozy, bickering middle aged couple, a prostitute, and a middle-aged receptionist in an office building. The film has very little in the way of a narrative structure; our mad artist basically drifts around in a stupor, encountering people and killing them. This may be part of the director’s masterplan; this mess apparently was some attempt to make a statement about the isolation of urban living. Viewers are treated to a bizarre dream sequence in which the artist staggers deliriously down canyon-like city streets barefoot and ragged, stopping to bang his fists against what appear to be the tall wooden doors of a church. Holy Fellini on Ripple! There’s also a documentary-like sequence in which the landlady of one of the killer’s victims is interviewed by a reporter and spouts bland, insincere compliments about a young woman she probably never spoke to(“She was a nice girl, never any trouble,” etc.)The entire film has a hollow, detached feel to it, something that can’t entirely be blamed on the filmmakers’ incompetence. Or maybe I’m just an optimist. Make no mistake, it is bad–crummy sound and cinematography, stilted dialogue(when available), superflous characters(the artist’s wealthy former girlfriend, a young art student who wants to take lessons)who must have been inserted to give friends of the director parts, and artsy sequences that were intended to show the filmmaker’s vision but only showcase his lack of ability. And this flick was on video at one point, but is undoubtably out of print now. If you have any independently owned video shops in your area and don’t mind slumming(you know, the kind that have a back stock of wretchedly bad old videos), look for this one. Rent it, get some of your hipper-than-thou friends together, and inact your own episode of Mystery Science Theatre!

0 44
Springfield Is In Oregon