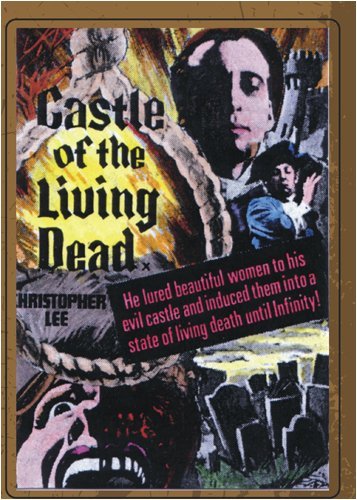 This Gothic Horror dispenses with heaving cleavage, secret passages and all that jazz for a cautionary tale regarding trusting creepy ass Counts who hand you invitations to their similarly creepy castles, and, strangely even for a Euro-horror film, it has Donald Sutherland playing three separate roles…for some reason.

The first strange occurrence happens shortly afterwards when Philipe finds what looks like a stuffed crow stuck to a tree branch. Puzzled, he casts it aside and heads for the castle anyway, all the time hitting on Laura while Bruno grunts about the money they’ll all make.

Of course, Christopher Lee plays Count Drago, who lives in the castle with his hulking man servant. Drago appears to be quite the rabid taxidermist, as his castle is stuffed with all sorts of animals. You’d have to be some sort of actor in a cheap horror film to not guess where things are heading next…especially when Drago mentions that the new creature he’s working with is ‘the most dangerous of all’.

Some people hate this film for some reason, but I found the set up different from the usual gothic horror clichés. Apart from Donald Sutherland’s performance as the witch, and the bumbling soldier, it’s good that the main hero of the piece ends up being the dwarf, rather than Philipe Leroy. I did have a good laugh at the dwarf dummy that is thrown off the side of the castle, mind. The sight of Donald Sutherland as an old crone speaking in rhyme and making a dwarf touch his/her hump for luck is something to behold also.

I think this is also the earliest film I know that uses the Gardens of Bomarzo (aka The Sacred Grove or Park of the Monsters) as a location. Created in the 16th Century, this place is full of bizarre sculptures and buildings used by some fella to cope with the grief of his wife’s passing. The Orcus is the most famous of the sculptures, having been used in the film The Relic, the naked Sherilyn Fenn film Phantoms, and of course Luigi Cozzi’s utterly demented and classic film The Adventures of Hercules (which is one of the most entertaining films ever made).