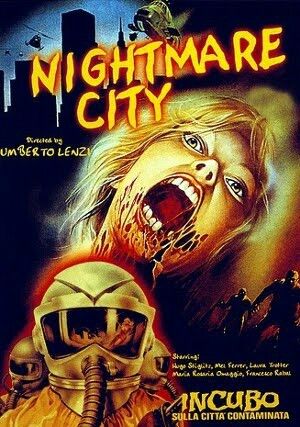 You can’t honestly give any excuses for this movie; it’s just plain cheesy. You could say that it’s just a horror movie and it shouldn’t be taken seriously, but that’s a lame excuse. This movie is just not good at all. From the terrible makeup fx to the hokey dialogue, there’s not much of redeeming value in this movie.

The plot itself is pretty humdrum. Hordes of the dead terrorize a big city while spreading their walking-dead disease to others.

The only interesting part of this movie is how it tries to follow several groups of people and their encounters with the zombies. Among the people whose stories are followed are a military major and his wife, General and his daughter and son-in-law and last but not least, a reporter and his wife. The best sub-story is that of the reporter who witnesses the start of the mayhem firsthand and attempts to break the story of the walking dead, while people turn a deaf ear to his reports. The reporter tries to stay alive and rescue his wife from the chaos. Hugo Stiglitz is great as the reporter kicks some major butt, especially near the movie’s end. The rest of the substories that the movie oscillates between are boring and pedestrian though.

The “zombies” in this movie are decidedly some of the more active ones in movie history. They run, jump and even use weapons. Some of them actually look like living humans, except they have some ghastly scare. “City of the Walking Dead” was a badly chosen title; “City of the Running, Jumping and Scampering Dead” sounds more apt. You could argue that they are far more lifelike that the people in this movie, especially the military guys, who apparently are too damn stupid to follow the advice of their superiors and shoot the zombies in the head.

The movie isn’t too scary at all. There are some genuinely creepy moments, such as when the reporter’s wife fumbles around in the dark in a hospital and encounters one of the walking dead. That was one of the only chilling parts of the movie. The scene where the major finds his wife is also pretty creepy, although it was predictable. For the most part, the gore was nothing that hasn’t been done better in other movies, although the lively zombies did make them considerably more vicious.

The makeup was really terrible. Most of the zombies look like normal humans, except for a little blood here and there and a crazed look in their eyes. It would have been best if the filmmakers went with that look for the whole movie, as the makeup jobs usually consisted of a few cheesy cast-like extensions and mud-like molds being added to creature faces.

City of the Walking Dead is a decent movie to watch if you aren’t took picky with your horror movies. It has some decent action and some novel concepts that were extremely flawed in implementation. Otherwise, stay far away from this one. Furthermore, a word of warning: you will groan at the movie?s ending.