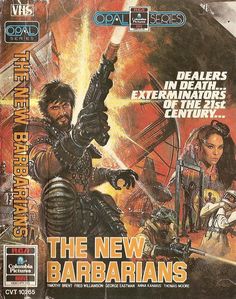 Pulling cinematic threads together I Nuovi Barbari saw a second life when it’s model city sets were reused in Lucio Fulci’s Guerrieri dell’anno 2072 (The New Gladiators). I could be wrong and an Italian man could have gleaned a lot of work building cardboard cities for all those 80’s Italian post-apocalypse films. Regardless, the opening credits let us know the world came to an end due to a meteor or some stagehand’s forgotten cigarette crashing into a cardboard city. After this we have to deal with another of Max Rockatansky’s cousins that suffers a few mental setbacks. Scorpion drives around in his mock up V-8 Interceptor with a big glowing bubble dome in the roof, superfluous tubes, and hood mounted chrome skull. Scorpion’s enemies are a smorgasbord of peeved caddies that roll across the wasteland in their super-modified golf carts complete with slicers, dicers, disintegrators, spears, donkey molesters, and other implements of golfing terror and destruction. The terrified victims of these rampaging carts are hard pressed not to completely outrun these lumbering carts of woe and despair. Laden as they are with donkey molesters, flame throwers, tin foil, and extra passengers these vehicles of the brave new wasteland top out and redline around 2 MPH. Apparently all the survivors of the wasteland made fun of the golf carts because One (George Eastman), the leader of the post-apocalyptic rugged caddies that call themselves the Templars wants to kill everybody in the wasteland. Scorpion (Giancarlo Prete) being the yin to One’s yang only wants to kill a select few people, mostly ones that ride around on golf carts causing trouble. One (Eastman) establishes himself as the true entity of evil early on by effortlessly ripping (or rather breaking) a bible in half in a rather comical display of strength. Giovanni Frezza makes an appearance as the young mechanic and you may very well recognize him from Bava’s Demons 2 or Fulci’s House by the Cemetery. Giovanni gives another stellar performance as he freely transforms from his diminutive figure to a strapping, full-grown stuntman in a blond wig when convenient.

Warriors of the Wasteland is a study in one take magic as it becomes painfully obvious that many special effects were botched and just left in, no retakes allowed. Most painfully obvious is a fleeing citizen almost, but not quite, (botched special effect!!??!?!) decapitated by a golf cart donkey molester. The head kind falls over staying connected and the body just slumps over, although it twitches effectively. Anybody can tell this should have been shot over but either the budget didn’t allow or Enzo G. Castellari (the director) just didn’t care. Another effect has a golf cart shaft spear a man’s rump, this may have been intentional as Scorpion receives a similar fate later on with a different kind of spear. Regardless, the effect is particularly lackluster. At this point things are bleak and we haven’t even gotten to Fred ‘The Hammer’ Williamson showing up. In a departure from ripping off Mad Max 2: The Road Warrior, I Nuovi Barbari steals from Rambo II and has Johnny Rambo appear, only Sylvester Stallone has morphed into Fred Williamson for so reason, go figure. Nadir (Williamson) decapitates his share of helmeted cart riders with his explosive bow and arrow combination. Add into the mix Scorpion’s love interest and you have your fab four fighting the white clad Templars of destruction and their menacing go-go golf carts of pandemonium.

Look for wooden acting, flat action, and gratuitous use of metal beer kegs placed inconveniently as obstacles to be rammed by vehicles or have actors fly through. Even at its worst I Nuovi Barbari is a superior work to later American counterparts that involve either lots of water or a guy delivering post apocalyptic parcels made by a certain guy that waltzes with lupines.

As far as post-apocalypse Italian cinema goes, Warriors of the Wasteland is just dull. None of the characters are nearly quirky enough to entertain, they’re just bleak, bland characters not nearly archetypal enough to empathize with. The fact that Scorpion’s mock muscle car is up against nitro-charged golf carts makes for rather dull chase scenes. By comparison Escape from the Bronx had tightly choreographed action scenes that set your adrenaline pumping. Escape from the Bronx was made two years after this so Enzo may have had time to sharpen up his directorial skills. However 1990: I guerrieri del Bronx (Bronx Warriors 1990) was made the same year as Warriors of the Wasteland and is leaps and bounds better than I Nuovi Barbari. I’d just chalk it up to Enzo having uneven directing skills or possibly just tacking an extra movie on after Bronx Warriors wrapped up filming. As far as Italian apocalypse films go, this is one of the weaker entries.